Any person, including a young person, who unlawfully assaults another person can be charged with a criminal offence. An assault includes hitting, kicking, pushing, spitting, indirectly applying force or threatening to apply force to another person.

It is also against the law to help or encourage an assault, such as by organising a fight or preventing the victim from leaving.

It is against the law to create, keep, share or ask for material that shows a person under the age of 18 being subject to torture, cruelty or physical abuse.  Serious penalties apply.

Under Department of Education policy, school students who start or film fights involving other students or on school grounds must be suspended. 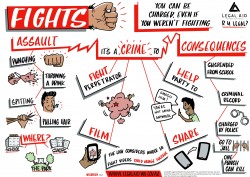 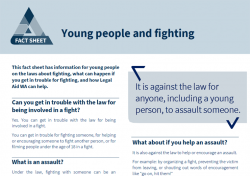 One punch can change lives - Animation