The laws about sexual matters set clear limits for having sex. People can’t have sex or engage in any sexual activity at all together if:

If police want to question you about an offence, see a lawyer as soon as possible. Don’t agree to do a video record of interview until you have spoken to a lawyer.

What does the law say?

The laws about sex and consent apply to everyone.

What is the age of consent?

In Western Australia, people under 16 years old cannot legally consent to having sex, even if they said 'yes' at the time.

The age of consent is 18 years old if there is a special relationship between them, where one person is in a position of power or authority over the other person. An example of this is the relationship between a teacher and a student, or a sports coach and a team member.

The laws about sex and consent can be different in other countries, states and territories.

How can I tell whether someone consents?

To consent to having sex, a person needs to be old enough (over the legal age of consent) and must freely agree to the sexual activity. Everyone who is old enough has the right to freely decide if they want to have sex or not.

If you have sex with someone who is unable to freely consent, this is sexual assault, which is a serious crime.

Consent can be taken back at any time - it doesn't matter if you've already started to have sex.  If one person no longer wants sexual activity, then you have to stop.

Some people might give non-verbal signs that they want to stop instead of saying 'no'.  Non-verbal signs can include things like turning away, pushing your hand away, or not responding to your touch.

If you touch someone sexually when they don't want you to, it is a serious crime. It may not matter whether or not the other person has not actually said 'no' out loud.

The best way to be sure that the other person consents to any kind of sexual touching is to ask them what they want to do, and check to see if they want to keep going.

What are the legal consequences for sexual offences?

You can be charged with really serious offences and sentenced to a long term of imprisonment.

If you are convicted of certain sexual offences you will be declared a ‘reportable offender’ and be placed on the sex offender register. This will make it very difficult for you to work with children and you will need to let police know every time you change your address, change the way you look, change jobs or plan to travel.

Make sure you speak to a lawyer before you answer any police questions or do a video record of interview. If you are charged with a sexual offence, get legal advice as soon as possible. 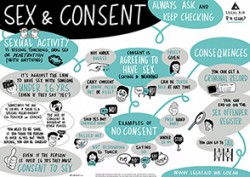